The roles have been reversed and podcast favourite Lucy Bartholomew is interviewing ME for the 20th episode. Despite some reluctance on my end, Lucy convinced me that it is nice for you (the listener) to know more about the person interviewing all of these epic guests! Despite being interviewed on many other podcasts over the years, this surprisingly felt exposing – which is a healthy reminder for me in my role as host! Neither Lucy or I held back in what we shared.

So here it is, and our regular conversations will continue in the next episode!!!

A brief snapshot into me:

After a decade of study, I became a lawyer working for the largest international law firm in the world – Baker & McKenzie. I traded in my heels & mini tailored suit (which we discuss in the episode) for running shoes and I have spent the following decade using running, adventure and storytelling as a vehicle for social impact. Specifically, in the space of access to education; women’s empowerment and supporting First Nations communities and organisations. I was the first woman to complete the 4 Deserts Grand Slam; traversed 3500kms across India on foot and completed the World’s Toughest Race.

I am a proud Goodwill Ambassador for World Vision Australia, the Royal Flying Doctor Service of Australia and a corporate presenter. Last December I married Mark Wales, who I met on the set of Survivor. Together we have a wild two-year-old called Harry. I have raised $1.5 million dollars for charities such as World Vision, Save the Children and the Australian Red Cross, with the talent and time of some epic people.

You can check more of my tales from the trails via www.samanthagash.com, socials @samanthagash & youtube https://www.youtube.com/user/samanthagash 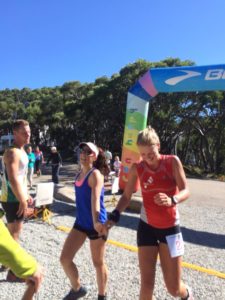